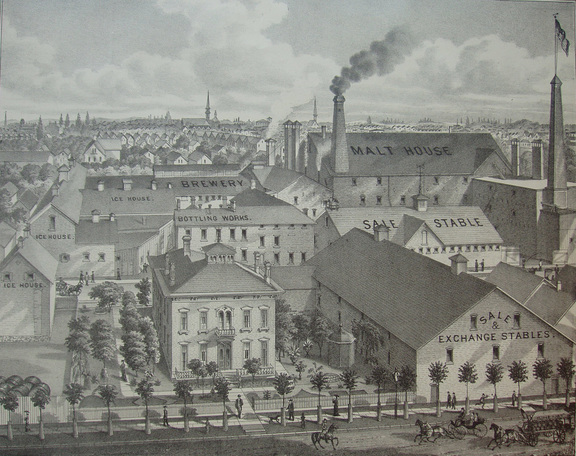 Buffalo, New York, located at the terminus of the Erie Canal, has a long and storied history with the brewing and malting industries. Joseph Webb was the first to brew beer commercially in the Village of Black Rock, now part of Buffalo in 1811. Brewing continued until the William Simon Brewery closed its doors on Buffalo’s East Side in 1972.1

In the mid 1800’s, several factors combined to secure Buffalo’s position as a large brewing and malting center. Included were a growing population of beer loving German, Prussian, and Alsatian immigrants, plentiful amounts of natural ice and later; electricity for ice making and refrigeration form hydroelectric power at nearby Niagara Falls. Also important, was Buffalo’s role as the major transshipping port between the Great Lakes and the Erie Canal. Buffalo became the countries largest grain storage and shipping center, moving 25 million bushels in 1850 alone. Buffalo also had the world’s first automated grain elevator. 2

In 1872 there were over 33 breweries and 22 maltsters listed in the 1873 city directory as operating in Buffalo. The breweries produced 176,299 barrels of beer and ale that year.

Much of what follows is the end result of several discussions the author had with Joseph Cafferty between Christmas Eve, 1999 and May of 2001, when Joe was 86.

The East Buffalo Brewing Company, located at 298 Emslie Street, reopened as the Phoenix Brewing Corporation in 1934, a year after prohibition ended. Joe found work at Phoenix that same year beginning his 38-year career in the malting and brewing industries.

In 1935, Joe went to work for the Fleischmann Malting Company, near Niagara and Ontario Streets, on Buffalo’s West Side. At Fleischmann’s, the grain was stored in large room size bins filled from large shoots. These shoots would sometimes clog with barley husks and had to be manually cleaned out and reopened. This process was tedious and could be dangerous. Being one of the younger employees and new on the job, Joe volunteered to do the work in exchange for the Forman’s promise of a half-day off with pay.  Joe was lowered into the bin on a wooden seat attached to a rope and started working to unclog the grain shoot with a wooden shovel. While shoveling the husks out of the way, the barley suddenly let loose and began pouring into the bin at full force.  Joe almost lost his seat and drowned in a sea of grain.

Grain was moved throughout the plant on conveyors and any loose husks would end up on the plant floor. Joe and the other workers would shovel the husks off the floor so it could be sold as feed for cattle. The men used wooden shovels for this job, as the plant was always full of grain dust, a very explosive material. A spark from a metal shovel could set off an explosion and fire.  Joe and the other workers would collect as much of the grain dust as possible, and using metal baskets, carry it out back to be dumped into the Erie Barge Canal.  On one occasion, Joe was dumping a basket of grain dust, lost his grip, and dropped the basket into the canal. He knew the boss would not be happy when told of the lost basket.  Joe chased the basket as it moved along with the current and almost fell as he unsuccessfully tried to retrieve it.

The towpath along the Erie Barge Canal and Niagara Street near Fleischmann Malting was populated with many saloons.  Most of them served fish fries on Friday nights. Joe and his fellow workers would go there for supper and a few beers after work. Some bars would provide the fish fry for free if you ordered and paid for a beer. This may be part of the reason why the “Friday night fish fry” remains so popular in the Buffalo area to this day.

In 1936 Joe again changed jobs and went to work for the Iroquois Beverage Corporation, one of Buffalo’s oldest and largest breweries. The Iroquois Brewery began as the Jacob Roos Brewery in 1830. The original brewery was located in an area of downtown Buffalo, near the waterfront, called  “Sandy Town”. Jacob reportedly delivered his beer to customers in half kegs carried on a wheelbarrow. In 1840 Jacob moved his brewery to Pratt Street on Buffalo’s East side and operated the brewery until his death in 1867. George Roos continued the brewery operation until 1893 when Leonard Burgwerger purchased it. He built a new brewery on the site and called it the Iroquois brewing Co.  The brewery continued in operation until “Prohibition” in 1920. It reopened again at the end of “Prohibition”.

Joe began his employment in the keg department and as it turned out, he was the only Irishman on an all-German crew.  When the United States entered World War II Joe took a leave from Iroquois to join the US Army. While serving in the military he participated in the Normandy invasion of Europe. After the war he returned to Iroquois and worked there until 1971 when, as part of the International Breweries Corporation, it closed its doors forever. During his many years with Iroquois, Joe was a keg washer and filler, and also worked in the filtration and carbonation department. He ended his career as the cellar boss in the keg department.

Competition among Buffalo breweries was fierce during the forties and fifties.  Most beer deliveries were made to the tavern or saloon basements. Joe said beer delivery drivers were not above popping the caps on some of their competitor’s bottles during deliveries to spoil the contents, along with the competitor’s reputation.

Another incident Joe recalled was when a new owner of Iroquois arrived at the Buffalo Airport.  All of the brewery’s beer trucks and employees were sent out to the Buffalo airport to welcome the new owner in style.  When the owner introduced himself he asked all the Iroquois employees to loudly order Iroquois beer whenever they ate out at a restaurant or bar and to complain if Iroquois beer was not available.

Joe and his fellow workers belonged to Buffalo Brewery Workers Local #4. As part of the union contract there were daily beer breaks at 9:00AM, 10:30 AM, 12:00 noon and 2:30 PM.  This accounts for the beer taps strategically placed throughout the brewery. Iroquois also had a large rathskeller and Indian Head saloon on site for visiting tours and worker get-togethers.

The author’s uncle, Frank Bodekor, also worked many years for Iroquois Brewing Corporation until they closed.  He was a mechanic in the brewery’s boiler room. In the late 1940’s and early 50’s my father, who worked for the Buffalo Fire Department, would sometimes take me along when he visited Joe or Frank at the brewery.  During these visits, there always seemed to be Buffalo Police cars parked on Pratt Street at the brewery employee entrance, with policemen in the lobby. Of note: there was a beer tap conveniently located in the lobby. Joe and Frank both said, that in later years, the taps were locked and keys were only issued to workers.

After several owner changes and a failed acquisition by the International Breweries Company the Iroquois Brewery closed in 1971.

Brewing continued for another year until Buffalo’s last remaining brewery, the William Simon Brewery, closed its doors on Buffalo’s “East Side” in 1972.  With the closure of these last two breweries, the occupation of “brewery worker” also ended in Buffalo.

After a fourteen-year hiatus, beer was again commercially brewed, starting in 1986, at the Buffalo Brewpub. The brewing tradition is kept alive in Buffalo at several local brewpubs and the “Flying Bison” microbrewery, opened in 2000.

1 Malting is a process whereby grain is made usable for the brewing of beer.

2 It can be debated as to weather the commercial brewing of beer in Buffalo actually stopped during prohibition (1920 - 1933). 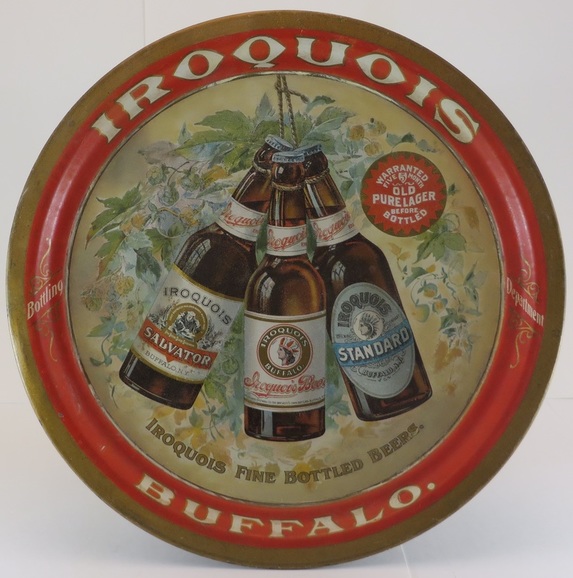